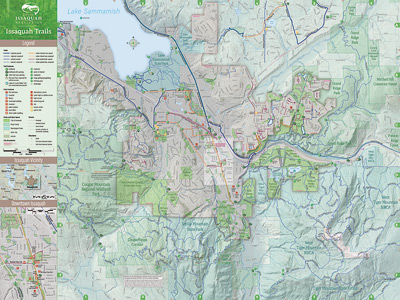 The city of Issaquah wraps around the southern end of Lake Sammamish and includes parts of Cougar, Squak, and Tiger mountains. (The print map, when unfolded, measures 21 x 28 inches.)

Lying at the foot of Cougar, Squak, and Tiger mountains, the City of Issaquah is uniquely situated as a natural starting point for exploring the Issaquah Alps via hundreds of miles of trails that are accessible from numerous trailheads in and near the city. Issaquah recently published a new citywide-plus trails map created by the King County GIS Center Client Services group to feature the resources and opportunities the city presents for trail users and to guide them on their way.

At its core, the map features the full extent of the city and its own network of in-city trails, trail parking and access points, parks and open spaces, and a variety of other civic features and landmarks. The city’s project team provided GIS datasets and supplemental information for mapping these features.

The areas of the map that fall outside of Issaquah’s boundaries display GIS datasets from Issaquah that extend into much of the surrounding area combined with data from the King County GIS data library and from various King County Parks maps, particularly those from KC Parks’ Backcountry Trails series.

Design and production of the Issaquah Trails map followed the well-established cartographic processes we use in the KCGIS Center to produce the highest quality map products, processes which feature a blend of GIS and graphic arts tools and techniques. We created the map to be first of all an outstanding print product. But it is no less a versatile digital product which can be viewed on desktop computers and downloaded to mobile devices as a georeferenced PDF file. If you have cellular service while you’re out on the trail, you can even geolocate yourself on the map (using a free app). If not, you still have the full map on your device. Take a copy of the print map along and you’re covered all around!

The Issaquah Trails map was a sum-is-greater-than-the-parts collaborative effort between the city’s project team members, who, in addition to content, provided clear direction, guidance, and feedback about what they wanted their map to be, and the experienced KCGIS Center team of GIS analysts and cartographers.

Now, dear readers, may I respectfully suggest that you take a hike!

Patrick Jankanish is Senior Cartographer in the King County GIS Center and is a member of its Client Services group.