A little over a year ago, I wrote a post for GIS & You which featured the more than two-dozen map products that we in the King County GIS Center have derived from the King County Metro Transit System master map, a product we redesigned and rebuilt with Metro in 2012. One of those additional maps, first created not long after that new 2012 system map, was a public Emergency Snow Network map. Metro, in coordination with area jurisdictions, including the City of Seattle, has long designated a network of high-ridership bus routes that can use typically plowed streets, and which avoid steep hills, to provide a reduced but core level of service during major snow events.

It is fortunate that weather conditions over the last six years had not necessitated the activation of Metro’s Emergency Snow Network (ESN). That is until two days ago. From service planners to bus drivers to fleet mechanics, road crews, and supervisors to communications specialists and department managers, Metro has been working around the clock to provide mobility to the region during this past week’s snowstorms and dangerously icy aftermaths. A part of that effort, as of early Saturday morning, February 9th, has been the Emergency Snow Network map (PDF link).

Working with Metro service planners and communications staff, we have updated the map annually to ensure that it is always ready to go when a storm hits. Its time finally arrived and Metro’s communications team, which manages tons of public information about regional transit service daily as a matter of course, was prepared to ramp up their production even further. And in the case of the ESN, they had a ready-to-go assist from the King County GIS Center.

As a transit user, I’ve been especially appreciative of the unflagging efforts of Metro and Sound Transit staff to get me and my fellow riders to our destinations and especially back home over the last week. As a cartographer I am happy to have the work we do in the King County GIS Center help in Metro’s mission to serve the public under especially challenging conditions. 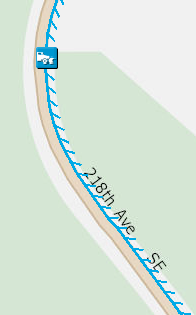 The ESN map is just one of many ways that the King County GIS Center supports emergency management in King County. For example, My Commute is operating daily to provide information about road restrictions and closures, and even the status of snow plowing on King County-maintained roads. Our flagship online map product, iMap, includes information about flood-prone areas. And KCGIS Center staff help provide mapping readiness to the Office of Emergency Management and on-site support to the Emergency Coordination Center during major events.

We never want emergency conditions to occur, but when they do, GIS will be central to keeping our region moving and functioning.