Last month we introduced a new GIS & You feature—a (hopefully) monthly contest called Where in King County? Last month’s contest asked you to use the capability of iMap, King County’s flagship web-mapping application, to identify a small park based on some visual clues and a helpful hint. If you played along, you learned how to select an iMap basemap and turn on the “Parks and Trails” layer.

This month’s contest is more difficult (though perhaps not for those who like to hit the trails in King County’s share of the Cascade Mountains). The challenge is to identify the name of the mountain peak depicted on this image taken from iMap:

‘What am I looking at?’ you might ask. To the uninitiated, it looks like a bowl of spaghetti, with about a third covered in pesto sauce. Those curvy lines that you see aren’t spaghetti—they’re contour lines. Each contour line connects points at the same elevation above sea level. Here is a close-up of the peak:

To recreate this contour map in iMap, select a basemap from the iMap Basemap Gallery. I suggest using the King County Standard Basemap. Then from the Layer List, select Elevation Contours. I also selected Property Layers. As you zoom in or out on this map, you’ll see that the contour line density changes. For a full-county view, only 500-foot contour lines are shown. Zoom in to a small neighborhood in Seattle, and you’ll see 5-foot contours. 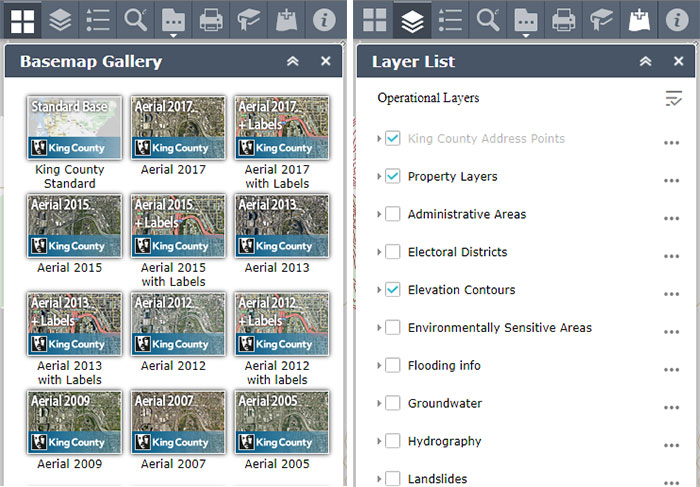 What other clues do you have to identify this peak? The green area on the map isn’t pesto. It designates a park or park-and-recreation related public property. In fact, it’s property owned by the Washington State Department of Natural Resources, or WADNR. There are some property lines visible. The non-WADNR property on the map is all owned by the U.S. government, except for one sliver of land, for which the KC Assessor report indicates that the ownership is “unknown or undetermined.” The WADNR property is part of the Middle Fork Snoqualmie NRCA (Natural Resources Conservation Area).

iMap, unfortunately, won’t tell you the name of the peak. Once you find the peak on iMap, you could ask a 20-year-plus member of the Mountaineers, or maybe an REI member with a membership number under 100,000.

There’s one last source you could consult. The King County WA Peaks List is an unofficial list of a few hundred peaks and high points in King County. If you know the approximate elevation of the mystery peak, and all else fails, this list should help you identify the correct name of the mystery peak.

Answer the question in the comments section below (include your name). The first correct answer received wins and will earn the winner a fabulous prize…well, some sort of prize.

To learn more about the elevation contour lines shown in iMap, see the map layer details.

6 thoughts on “Where in King County? Name this mountain.”