I’m living in Seattle, so why does it feel like I’m in Portland?

We know the climate is changing. But what exactly will the weather be like at some point in the future for where I live right now? Good question. Predictive climate models can help give us some understanding, but narrative descriptions of more of this (heat), and less of that (snow) may fall short of bringing the message home, so to speak. A very clever study published in Nature Communications can perhaps better prepare us to conceptualize and personalize the consequences of climate change, and perhaps spur us to action on the issue.

In GIS we have coined the term digital twin, the idea of creating a detailed digital version of your city or community. Well how about climate twins? Compare the weather predicted for your city at some point in the future, and find the city whose climate is most like that today. This is exactly what researchers from the University of Maryland and North Carolina State University did in their study. They developed climate prediction models and extrapolated out 60 years to the year 2080 and to create climate twins. For instance, Cincinnati’s weather becomes the same as today’s Clarksdale, Mississippi. Omaha, Nebraska becomes Enid, Oklahoma. Closer to home, living in Seattle could be more like living in Milwaukie, Oregon. Portland becomes Lincoln, California, a town just outside of Sacramento. And so on. 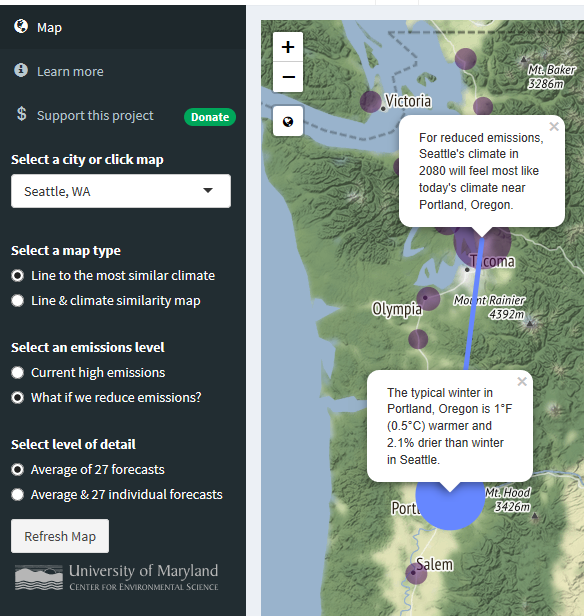 While it is entertaining to experiment with the interactive map, it is sobering to realize the overarching consequences of climate change for North America. Much of the West will be hotter and dryer. The Northeast hotter and more humid. And some areas will just become unbearable places to live.

The article in Nature Communications is quite extensive and includes details on their methodology and the strength of their findings. Several interesting maps are also included. I recommend giving it a closer look. I was first alerted to this study by an article on www.inhabitat.com titled “Climate twins: which city will your city feel like in 2080?” It is a website focused on environmental policy and awareness.