I travel via Sounder Commuter train from Edmonds to my job at King County every day. I maintain that I have the most beautiful commute in the world: blue skies above Puget Sound dotted with sailboats and fishing boats in the summer. Awesome sunsets in the spring and autumn. Sometimes during autumn mornings, commuters who are awake can spy bald eagles fishing.

However, each winter mud slides sometimes cover the BNSF tracks that run along the sound. Federal Railroad Administration rules require passenger trains to be halted for 48 hours after even an inch of mud covers the tracks. Every winter when there is significant rainfall, the lyrics of Phil Rosenthall’s song Muddy Water as sung by the Seldom Scene drift through my brain.

Mud slides are an occasional inconvenience for me, but they are a real hazard across Washington state. March 22 will be the fifth anniversary of the Oso Mudslide that killed 43 people—the deadliest mudslide in U.S. history. Washington state is one of the most landslide prone states in the nation. In October 2009, a landslide blocked highway 410 and dammed the Naches River. The 1980 Mount St. Helens landslide traveled 14 miles and was the largest debris slide in U.S. history. Going back further in history, the Columbia River was blocked by landslides at least twice, in 1872 at Ribbon Cliffs and in the 1400s at Bonneville. Mudslides, landslides and rockslides are often triggered by heavy rain that lubricates steep or unstable slopes.

Where in King County should we be concerned about “muddy water” as well as landslides, rockslides, and other potential hazards? iMap is a great resource for understanding where these hazards are located in unincorporated King County.

Your “Where in King County” question for January is to determine the length of a small portion of I-90 that is covered by designated “Alpine fans….subject to debris flows.” You will also have to identify the mapping method that was used to determine the hazard area.

So what is an alpine fan and how can I find them on iMap?

To find the location of landslide hazards in King County, fire up iMap and select “Landslides” from the Layer List. This will bring up a pretty scary view of King County that shows a bewildering variety of hazards, ranging from Vashon Island to the crest of the Cascades. 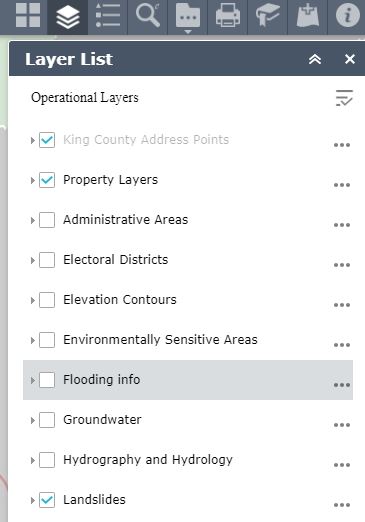 Next, with the Landslides layer selected, click on the Legend icon. This will display the landslide symbols used. Identify the two symbols that correspond to alpine fan related hazards. Now that you know the alpine fan symbols, you need to do a map reconnaissance along the route of Interstate 90. You will see many hazards that come close to I-90, but only one instance where there are two alpine fan-related hazards side-by-side that completely cover the route of I-90. 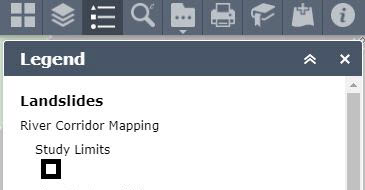 Now that you have identified them, how do you measure the length? Don’t put a tape measure up to your screen! Click the Draw and Measure Tools icon and select “Measure (simple).”  Measure the longer (westbound) lanes. Click on where the hazard area first crosses the lane, then click a few more spots along the lane until you come to where the area last crosses the lane, and then double click to stop measuring. The distance will be shown under measurement results. 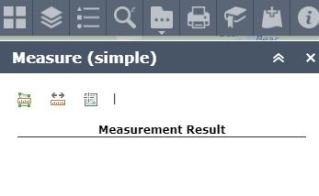 How do you determine the mapping method used to delineate the hazard area? Click on the alpine fan areas on the map and a pop-up should answer this question and provide additional useful information.

Once you have the answer (both the length and the mapping method), enter it in the comments section below (include your name). The first correct answer received will earn the winner a dandy prize.

“Muddy water’s changing all I know…”

2 thoughts on “Where in King County? Muddy Water”